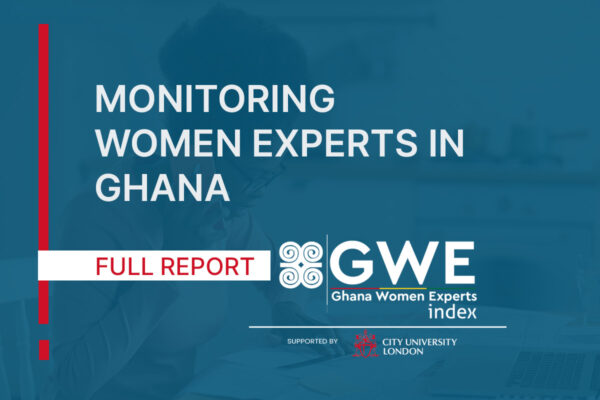 When people turn on the radio every morning across Ghana, the voices they often hear belong to the hosts, politicians, analysts, experts, and other newsmakers -most of whom are men. Men dominate the media landscape in Ghana. A global report on the status of women in the news media found men outnumber women by almost a 2:1 ratio in the six news companies surveyed in Ghana. A Media Foundation of West
Africa survey found that “men consistently dominated all programs between June and November 2014.” Out of the over nine thousand guests featured in the five thousand programs monitored on 24 radio stations, only 1,842 were women.

The under representation of women’s voices and issues in media is reflected across other sectors in the country. Only 30 women are in Ghana’s 275-member parliament house, while only eight of the eight-five ministers are women. Only 36 out of the 212 persons appointed across the country were women. The numbers of women in top administrative positions are also low, with only three out of the 12 Justices of the Supreme Court being women. Men dominate leadership positions even in organizations where women are in the overwhelming majority, like the Ghana Registered Nurses Association and the Ghana Union of Traders. Yet, women account for more than half of the population, 51.2 percent to be exact.

The Ghana Expert Women project sought to count the number of women interviewed as experts and authority figures in the media. The project aims to highlight the gender gap by drawing attention to the under-representation and misrepresentation of women in media. For the first round, we sampled six flagship programs from four radio and two television stations between February and June 2021. Over the five months, monitors counted the women interviewed as experts and authority figures, their time, and the topics they covered. We found that a low number of Ghanaian women were interviewed on radio and television in the media for their expertise during the period. The monitors observed that hosts also accorded men who had no expertise in a subject more respect during discussions. They also found that male experts were given more airtime than female experts across the shows.